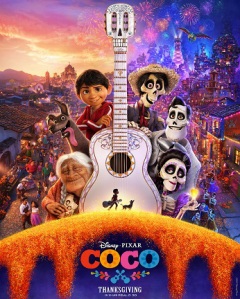 With all of the bad weather that we have been having, over here in England, I figured the best thing to do would be to light the fire, make a brew, get comfy and put on a Disney film. Pixar’s Coco to be exact.

Coco is a film set in Mexico, and it follows a 12 Year old boy named Miguel. Despite his family’s generations-old ban on music, young Miguel dreams of becoming an accomplished musician like his idol Ernesto de la Cruz. Desperate to prove his talent, Miguel finds himself in the stunning and colorful Land of the Dead. After meeting a charming trickster named Héctor, the two new friends embark on an extraordinary journey to unlock the real story behind Miguel’s family history.

Pixar have done it again.

It would seem that Disney Pixar has risen the animation bar another notch! I love a Disney film, and I love a Disney Pixar film, but the recent releases from these giants, haven’t really hit the mark. Finding Dory didn’t do it for me, I thought it was just like Nemo. It was so un-engaging that I cant actually remember the story.  All over the internet there have been rumours that Pixar were struggling, and that they were having trouble with the films that they made not making any money. (not that it would really make any impact, on account of them being BILLIONAIRES) It would seem that the next Pixar films coming out are all oldies but goodies. Incredibles 2, and apparently Toy Story 4?! ( is it going to be terrible?? Are they just playing it safe with tried nd tested films?)

But, I am here to tell you, that Coco was brilliant. The visuals, especially, are jaw dropping. The animation studios Must be proud of themselves for doing such an amazing job. The clothes look unbelievably real, as do the water scenes, to the point you have to remind yourself that they are animated.

What is the moral ?

As is the norm with a Disney film, it is kinda hard to escape the moral of the story, with the typical formula,(good guy, bad guy, trustee sidekick) and it was fairly easy to see what was going to happen next. This in no way detracts from the stunning directing and animating.

The film was directed by Lee Unkrich (Toy Story 3) and Pixar animation veteran Adrian Molina (Toy Story 3, Monsters University, The Good Dinosaur) and produced by Daria K Anderson. (A Bug’s Life, Monsters inc, Toy Story 3). An Award winning team with many awards to choose from, meaning this should be a blinder! 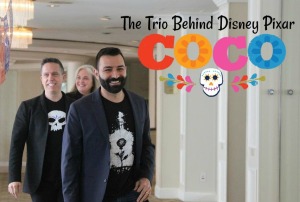 In order of front to back is Adrian Molina,Lee Unkrich and Daria K Anderson.

The way that the scenes are set up are brilliant, with some amazing wide angle shots of the city. The directing of the entire film was awesome. The amount of colours that they use throughout, and the variety of angles they are set in are fabulous!

(Amazing! look at the amount of detail there is in that scene alone. Thats talent!)

The story itself is beautiful, and makes the subject of death, which can sometimes be a difficult subject, especially with children, seem like a magical and mysterious topic. Mexican folklore is the main inspiration for the film, being set in Mexico, on Dia de los Muertos (the day of the dead). Which is the day that peoples dead relatives can come back to the living , by following paths back to their shrines and alters, where the living relatives have laid out pictures, food offerings, and the things that they loved whilst alive. Then, they have a big celebration.

This sounds like an amazing thing to experience not having anything like that in England. If you don’t know what it is, I suggest you google it 🙂 This story had pretty much everything you would expect in a brilliant film. Even unexpected turns and plot tempo changing. It kept my attention and kept me wanting to know what happens in the end.

Anyway, I won’t go into too much detail, I don’t want to give too much away, but I genuinely believe that this is a film that everyone will enjoy. If not for the story but for the sheer visual beauty.

In my opinion, I am glad that I watched this film and i honestly give it 4.5/5.  It was everything I hoped it would be, and more. I still cannot get over the animation in the film. If I had just come into the room, halfway through the film, and not known that it was even animated? I would probably have thought that it was a real film, with real people in it.(if the said people were far away in the film)

The story is very good too, it has tension that, at one point, was almost too much lol. It had emotions and situations in it  that are so easily relatable, for example, family bonds. I imagine if you were from Mexico, this film would be a classic for them. I’m sure i’m going to watch it again. If they can keep this train going then I’m sure Pixar will be back on top before we know it.